IN THE EARLY 2000’S THE CATCH AT THE ORIGINAL LOCATION AND WITH IT’S CURRENT OWNER JOE MANZELLA JACKETED STEAM KETTLES WERE FRONT AND CENTER in the entrance to the restaurant. We’re not sure why, but when The Catch relocated those beautiful steam jacketed kettles didn’t make the cut. Now Chef Mike Ritter is re-introducing steam kettle cooking to Orange County with Ritter’s Steam Kettle Cooking locations in Santa Ana and Huntington Beach. Chef Mark Peel has reintroduced the cooking method to Los Angeles at Bombo. 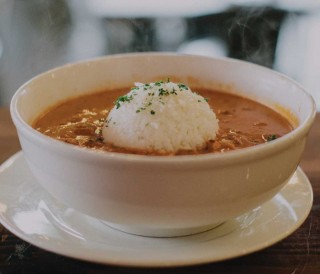 At Ritter’s, we cook your entrée right in front of you, in jacketed steam kettles. These kettles cook the food evenly and quickly in individual kettles.

What style do you serve/prepare? We serve Authentic Cajun/Creole Southern Dishes.

Please describe the style of cooking: All of our Dishes are prepared and cooked in our jacketed steam kettles. It is a quick and efficient way to cook the food that makes it near impossible to over-cook or burn the dishes due to the temperature and surface area. The style was first developed on Civil war era Naval ships as a method of cooking that did not involve any open flames.

What sets that style of cooking apart from mainstream full service restaurants?We offer a culinary style almost unheard of in Southern CA. Chef Ritter’s 30 years of developing and perfecting his recipes has made for an unparalleled and authentic culinary experience. Also, we do not pre-make any of our dishes. Everything you see is cooked from raw with fresh products directly in front of the customer from start to finish, with their own level of spice. What sets your restaurant apart in the marketplace of restaurants with the same style of cooking? Chef Ritter was one of the original Chefs to help create and develop the recipes at the famous Oyster Bar at Palace Station and he’s responsible for bringing this cooking style to Southern California.

What is the average cover per person including drinks? Generally we see and average of $20-$28 per person.

Customers generally don’t just dine with us once. More often than not, they make a point to bring in their friends or family soon after trying our food. The friendly service staff and cooks also make an effort to get to know every regular, to make them feel at home.

Ritter told the OC Weekly that a large boiler in the back pumps the steam through a network of pipes eventually ending up heating up the row of 12 stainless-steel kettles. Ritter then revealed that the units cost $3,000 each. Is it really that efficient? Is it really that much better than cooking on a regular stove? Ritter says yes. Bombo is Chef Mark Peel’s first ever fast casual venture. He has brought his pedigree in fine dining and as one of the father’s of California cuisine to an eatery where most of the dishes are cooked in steam kettles with his own custom made broths. All the dishes are steeped in bold flavor with fresh, seasonal ingredients.Chef Peel uses steel-jacketed steam kettles to prepare his vibrant food. Bombo dishes are very healthy because of the ingredients used and the way the food is cooked — less fat is needed to cook the food with the steam kettles.The dishes are cooked and served in moments, but the broths that they are cooked in take hours of preparation.Set on a stainless steel counter, six steam kettles are front and center in the bright, open kitchen, which provides diners some culinary theatre and a behind-the-scenes look at how Chef Peel runs his kitchen.What sets that style of cooking apart from mainstream full service restaurants? Most of the cooking is in steam kettles. The food is delivered much faster than a full service restaurant and with less fat.What sets your restaurant apart in the marketplace of restaurants with the same style of cooking? Bombo’s location at Grand Central Market in downtown Los Angeles allows Chef Peel to eliminate the trappings of fine dining and get right to the food, interacting with his diners. Chef Peel believes that food doesn’t have to be expensive to be good. Most of the cooking is done for all to see in the kettles on the stainless steel counter, providing a bit of entertainment and moving the preparation and cooking out from behind the scenes.

What is the average cover per person including drinks?$16