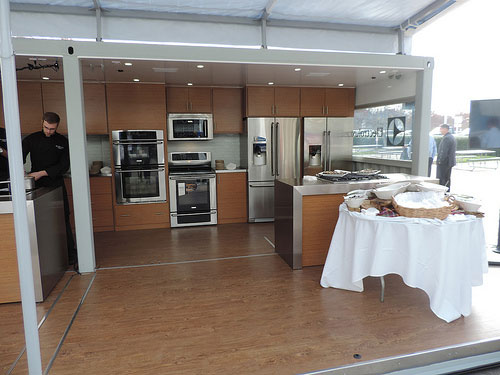 Boxman Studios worked with Electrolux to create a sleek and modern mobile kitchen showroom within a 40-foot shipping container. The container is purpose-built meaning that Boxman Studios used parts from other containers to construct a custom space from the ground up. The Luxkitchen unfolds to reveal nearly 550 square feet of showroom floor, and easily folds back into a 8-foot by 40-foot container for transport.

The Luxkitchen featured appliances include two microwaves, a dishwasher, two refrigerators, a front load washer & dryer, a double wall oven, two freestanding ovens (electric & gas), two induction cooktops, and a kitchen sink. The cooktop counters sit on tracks which are slid out onto the fold-down doors during use to further open up the space.

The Luxkitchen made it’s debut at the Electrolux company headquarters and will be appearing again in downtown Charlotte on December 22nd before the Carolina Panthers game.