WHAT WAS THE BIGGEST CHALLENGE OF CREATING A BREWERY FOR TAPS BREWERY AND BARREL ROOM? Finding a Head Brewer that could handle a production facility and all of the challenges that go with it. Finding just the right location was a legendary business challenge. It took close to four years and encompassed four different Orange County cities. It was a test of patience & perseverance for us all.

WHEN DID YOU START THE PROCESS? The decision to pursue a production brewery happened over five years ago. We had some turnover in our brewing operations then, and it set us back a bit. We also had three different location deals that were near completion and then fell apart very late in the process. 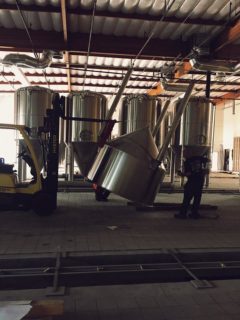 WHAT WAS AT THE LOCATION PREVIOUSLY? The building is not industrial, but what’s called “flex space.” I never wanted to locate our brewery and tasting room in an area that might have been lower rent, but was not as attractive. The space we found was a semi-conductor chip processing facility that had phenomenal utilities already built into the space,
especially electrical. And it’s surrounded by Tustin Legacy, light industrial, office, and residential developments all along Red Hill Avenue.

WHAT MAKES THIS PROCESS UNIQUE VS OPENING A RESTAURANT? It’s infinitely
more straightforward and far less complex. For example, we don’t have to deal with kitchen construction or the costs and all of the things that accompany that: grease traps, fire suppression, equipment and city approvals. This space is 90 percent brewery, 10 percent tasting room and patio.

WERE THERE ANY SURPRISES? Always. Plumbing on such a large operation is always going to cause headaches. We’ve spent enormous amounts of time addressing the existing plumbing and making the necessary adjustments. I don’t think we anticipated such a challenge or knew what it would take in hours and dollars to properly address this.

WHAT’S THE FUNNIEST OR MOST IRONIC THING THAT HAPPENED? I think a lot of people anticipated we’d struggle when we turned over the beer side of our business to new leadership five years ago. That great thing was our two main brewers—David Huls and Kyle
Manns—had worked for TAPS and knew us and our culture well. It was a great opportunity
to respect our classic European-style beers that put us on the map but also to explore the dynamic, ever-evolving creativity of the California craft brewing scene. That same year the new guys won Brewpub Group of the Year at the Great American Beer Festival and medaled with their beers four times. It was probably more stunning than funny or ironic, but
no less memorable. I’ll never forget it. TRADITIONAL RESTAURANT KITCHEN? We understand that most breweries don’t operate kitchens, but with all your kitchen design and operational experience, we’re surprised. Our CUP (Conditional Use Permit) doesn’t allow for a restaurant in that part
of the city. Even if it did, we made the decision long ago not to build a kitchen and
incur the associated expenses. We always intended to have a very small menu and
felt a food truck would and could execute it, while at the same time offering a more
fun and relaxed experience for our guests. Food trucks are still hot, and guests love
them.

WHAT THREE ASPECTS OF BREWERY DEVELOPMENT SURPRISED YOU THE MOST? The challenges with brand development, hands down. Buying, fabricating, and wrapping a food truck was a bear. Finding the perfect location for what we needed: right square footage, right ceiling height, right surrounding area, etc.

WILL YOU DO IT AGAIN? We are already planning smaller satellite tasting rooms between 3,500 to 5,000-sq-ft and also exploring eastward expansion to other states. WILL YOU INCREASE YOUR WHOLESALE SALES MODEL? Definitely. This only works if the tasting room sales support the kegs and bottles moving through the distribution network.

WHO WILL BE YOUR TARGET MARKET FOR THE BREWERY AND FOR WHOLESALE? We want to get back into distribution in the counties we used to be in — Orange, San Diego, Los Angeles and Riverside. We have also built relationships and will partner with some iconic retail and hospitality groups that will be announced when appropriate.