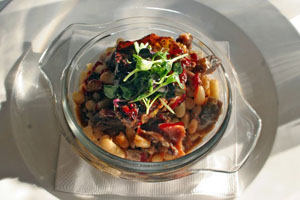 serving it free of charge.

PALM SPRINGS, Calif. May, 2013 At least one restaurant, Zin American Bistro, in Palm Springs is making its guests happy with complimentary servings of foie gras as a part of their wine dinners. The loophole they claim is serving it without charge as an amuse-bouche, the French term for a small tasting from the chef.

Most restaurants have followed the law banning the sale of foie gras that went into effect in July, 2012. Viewed as cruel by animal rights groups, production involves force feeding ducks to increase the size of their livers.The result is a buttery, smooth, melts-on-the-tongue nosh. It could be compared to really good chicken liver pate, except that when seared it acquires a crispy outside. Most chefs who serve the product contend the process is humane, often because they visit the farm themselves Napa’s La Toque Chef Ken Frank is just one.

Hudson Valley and two other groups are suing the state of California. Henley believes, “Letting the law stand would be a terrible precedent that could be applied across agriculture, where any state could ban an accepted agricultural product produced legally in other jurisdictions based on any local concern.” Although Henley sees the ban as unconstitutional, overturning a state law is a challenge. “We will have to wait and see,” he notes.

Sales to California and the consumption of foie gras are legal. “But you can’t re-sell the product,” Henleyexplains.

“Most people are too scared to serve it,” says Zin Executive Chef Chris Bowman about the fattened duck liver, with reason. Hot’s Kitchen in Hermosa Beach had protesters with signs in front of the restaurant, was sued by People for the Ethical Treatment of Animals (PETA) and received lots of hate mail on Facebook. According to spokesperson Kelley Coughlan, Hot’s served foie gras with a burger called The Burger and charged $13. After the ban came into effect they served the same burger for $8. “It really was complimentary,” she said noting the price. She believes the suit will not succeed and was filed simply to generate publicity.

Zin had some leftover foie in the freezer from before the law went into effect. He now purchases by mail order from Hudson Valley.

Zin owner Mindy Reed believes the law passed only because it’s a niche food. “It was an easy target. Lobbyists don’t exist, unlike the cattle or chicken lobbies,” she says. Putting foie on one of the wine dinners she believed would generate word of mouth and so far it appears to be working.After the first dinner, “Most people were very happy about getting foie gras.”

Reed’s extensive wine cellar is known for boutique vintages. “My wine list is alive, every month it gets updated. I like small boutique wines,” she explains. Her 350-bottle list often includes wineries such as Melvielle from whom she bought one case which sold out quickly. “I try to take our guests a bit out of their comfort zone.” The restaurant’s wine list has earned the Wine Spectator Award of Excellence for eight years.

“We serve phenomenal wine that easily justifies the price of our dinners,” she says. A dinner last December featured Michael David Wines with complimentary food pairings for $59. The food included a foie gras mousse cone, a beef tenderloin with foie gras sauce and chocolate cup cake with foie gras chantilly & maple bacon coulis among others. “Everybody loved the food.”

The recent Frog’s Leap dinner featured a glass of champagne with Chef’s Secret Fois Gras Amuse as prelude to a five-course dinner for $79.Other dishes on the menu were cobia with Spanish chorizo hash, potato kugel with crispy pancetta, and a petite filet with three peppercorn roquefort sauce. Clearly Chef Bowman is prepared no matter the outcome of the foie gras war.