Restaurants across Orange County have used their creativity to celebrate chicken by
dedicating their menus solely for fried chicken, reserving a special day of the week or
month for the feast or by building specials around the crispy delight.

Though fried chicken is nothing new or unique, it has been a longstanding favorite
amongst many over the years and is known to raise sales. To compensate for spicy or
salty flavors, restaurant owners have also found that beer sales increase as customers
find the pair to be complementary.

FOOD FANATICS SAYS THAT HAVING INEXPENSIVE CHICKEN DISHES WILL BRING DOWN THE AVERAGE FROM HIGHER-END PROTEINS, such as beef, which can be very costefficient
for your restaurant and today’s price conscious diners. Restaurant Business Online
advises that chicken-focused menus yield better margins but chicken dinner menu prices “ain’t what they used to be”.

Restaurants such as Park Ave, Grits and Three Seventy Common bring their own family traditions to incorporate into fried chicken nights each week.

“I’ve already done seafood and the burger market is totally saturated,” Chef Gruel said. “It’s a well-known fact that chicken is everyone’s go-to protein. I think that there’s so much low-quality chicken on the market and we really want to celebrate a higher standard for chicken, but also make it fun and approachable because who doesn’t love fried chicken or chicken sandwiches?”

Bruxie is known for their fried chicken and waffle sandwiches and a big bite of bird holds their number one seller spot with the “Original” sandwich, double dipped with a combination of spices, fried, then coated with chile honey and topped with cider slaw, between two crispy waffles.
“It takes time to prepare a quality product, but it’s so worth the wait,” Bruxie’s Director of
Marketing, Cathy Peterson said. “Our chicken is always marinated for 24 hours, and all items are cooked to order.”

According to the Chicken Council, U.S. consumers prefer boneless-skinless breast meat,
and wings have become an inexpensive byproduct for chicken producers. Chicken is being sold for 85 cents per pound at wholesale broiler prices, which has been the lowest it has been since 2011. There are conflicting reports and BMO Capital Markets analysts Andrew Strelzik and Ryan Royce said they found that the price of chicken wings increased nearly 11 percent last week to $1.91 each, compared to the same time a year ago, causing troubling news and stress for wing giants like Buffalo Wild Wings, Wing Stop, Chick-fil-A, Popeyes and the like.

Korean concepts such as the Bonchon franchise founded in Busan, South Korea,
specializing in Korean-style fried chicken, are on the rise in Orange County. 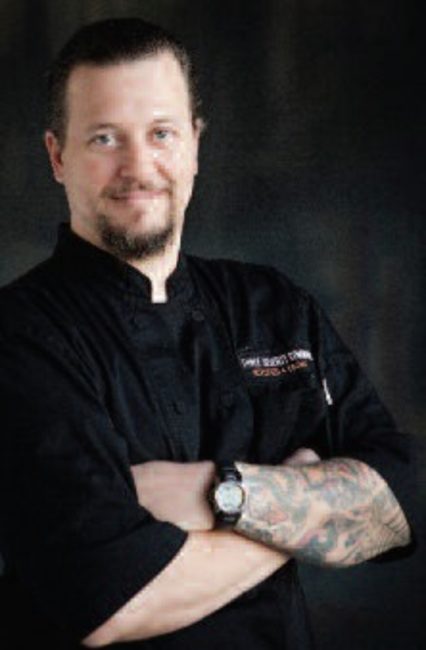 CHEF RYAN ADAMS
THREE SEVENTY COMMON – LAGUNA BEACH
WHY IS FRIED CHICKEN SO POPULAR? Fried chicken is popular because it reminds people of being a kid – food is about memories. This is why I started our Fried Chicken Nights at Three Seventy Common, and I’m proud to claim we were the first restaurant to offer Fried Chicken Nights in Orange County. The concept really took off after that.
WHY DID YOUR RESTAURANT DECIDE TO DO A FRIED CHICKEN EVENING? We started the Fried Chicken Sundays because fried chicken is a meal that everyone can relate to and usually brings back fond childhood memories.
WHAT ARE SOME CHICKEN SPECIALTIES YOUR RESTAURANT HAS TO OFFER? Fried Chicken Sunday is offered on the last Sunday of each month. Another delicious chicken dish available on our regular menu is the ‘All Natural Chicken’ served with onion, risotto, olive, caper, lemon, chile, garlic and herbs.
HOW HAS IT BEEN RECEIVED? ARE YOU USUALLY SOLD OUT? Our Fried Chicken Sundays have been very well received by both locals and visitors. We typically sell out for each dinner, so reservations are highly recommended. Fried Chicken Night is on the last Sunday of every month 5:00-9:00pm; Priced at $42 for adults and $21 for kids under 10, it includes the chicken, mashed potatoes and gravy, fresh green beans, kale salad, coleslaw and leafy greens braised with pork belly (sides vary based on fresh market availability.)
WHY DO YOU NOT HAVE IT ON YOUR MENU EVERY DAY? We don’t offer this meal nightly because it’s a prix fixe dinner. Also, the restaurant only has one deep fryer and most of the regular menu fried items are gluten free.
HAS IT BROUGHT YOU AN ADDITIONAL CUSTOMER BASE AND/OR DO YOUR REGULAR CUSTOMERS COME ON AN ADDITIONAL NIGHT FOR THAT SPECIAL? Both in fact, we have an additional customer base for Fried Chicken Sundays plus our regulars enjoy coming in as well. ARE THERE ANY DAYS WITH SPECIAL FRIED CHICKEN DEALS AT YOUR RESTAURANT? We do fried chicken, which we have had for 13 years on Sunday evenings only. It is a 3-course dinner for $25.50. Half a chicken brined in buttermilk with Cholula and apple cider is served with mashed potatoes and veggies, homemade butter and buttermilk chive biscuits, salad and dessert.
WHY DID YOUR RESTAURANT DECIDE TO DO A FRIED CHICKEN EVENING? I’m a third-generation restaurateur. My family was known for their fried chicken in St. Louis and it is a family tradition.
HOW HAS IT BEEN RECEIVED? ARE YOU USUALLY SOLD OUT? We’re pretty busy. We don’t sell it to-go; it is dine-in only, with one exception: on Academy Awards Night we sell 800 to 900 to-go fried chicken dinners.
IS FRIED CHICKEN TIME-INTENSE TO PREPARE? It does require 24 hours to brine. Frying it takes time and the oil must be at the right temperature.
WHY DON’T YOU HAVE IT ON YOUR MENU EVERYDAY? It is something we started as a Sunday tradition and we want to leave it that way.