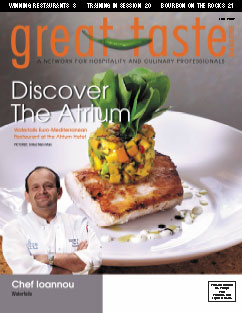 “I was in a bar with a friend and we both were ready to travel. This guy behind the bar had a globe. He says How serious are you?’ I said very serious.’ The guy said okay, I’m going to spin this globe and wherever it stops you start.'” The globe rolled to a halt on Copenhagen, Denmark. So, that’s where Chef Theo Ioannou, now Executive Chef at Waterfalls Restaurant at the Atrium Hotel in Irvine, started his 13-month culinary travel expedition. To date, Ioannou has visited more than 30 countries and worked in various restaurants in 11 different countries of the world including: France, Japan, Denmark, England, Sweden, Germany, Belgium, Greece, Hong Kong, Cyprus and the Philippines. “Each country is very unique…it was amazing to see different cultures and eat things that we (in the U.S.) take for granted,” he says. Born in Cyprus, an island in the Mediterranean, Ioannou gained extensive culinary knowledge traveling and also, memories that will likely last a lifetime.

Chef Theo has a lot of stories to share – living with a tribe in South Africa, cooking on the Queen Elizabeth II and the distinct honor of preparing dinner for Prince Edward at two private events. He even tells a story about eating dinner at a friend’s house in the Philippines who’s English pronunciation wasn’t strong. Theo was served a plate and thought that the description was duck. After eating, Theo asks “duck as in quack quack?” No, its dog he was told as in woof, woof. “So, I ended up eating Lassie,” Theo joked as we all cringed.

It hasn’t all been laughs for Ioannou. Since day one as a culinary student at age 16, he has proven his dedication and work ethic. After three years at the International Hotel and Catering Institute in Cyprus, he landed his first job as a Commis Chef in one of the World’s Leading Hotels where his father served as Maitre d’. Ioannou also held multiple chef jobs in England. That’s where he met Terry Greenhouse, the British culinary expert who specializes in ice carvings and butter sculpture. Greenhouse took Ioannou under his wing – “he changed the way I was cooking…I was cooking very basic. I really wasn’t thinking outside the box,” Ioannou says.

When comparing the kitchens in the U.S. to those in Europe Ioannou notes that chefs in the U.S. tend to work one station while in Europe, each chef is on a section for three to six months and then rotated. “The kitchen atmosphere working in Europe is very intense. There’s a lot of swearing…temperatures and tempers flaring and knives have been thrown.”

The experience Ioannou acquired through years of cooking with various cuisines in Europe paid off when he came to the states. He was hired on as Executive Sous Chef at Sutton Place Hotel where he later returned to become Executive Chef. Now, with 20 years experience as chef, he leads the kitchen at Waterfalls where he continues to enjoy cooking for others and teaching others. Since joining the Waterfalls restaurant a year ago, Ioannou and his crew have been developing and implementing the Euro-Mediterranean concept.

When Chef Theo Ioannou isn’t experimenting with flavors in the kitchen or creating his signature roasted lamb, he spends time with his two boys and also on the field as a USSF (United States Soccer Federation) qualified referee.

If not a chef, what would you be? a hairdresser. I actually took a course and passed

Biggest Myth about working in kitchen: it’s easy, anyone can do it

Average per person cover including beverage:

Juice of half a lime

Mix the mango, papaya and avocado in a bowl then add the garlic, chives, cilantro and chile. Season with salt and pepper, add the lime juice and olive oil. Mix the salad gently as not to bruise the mixture.

Juice from one lemon

Whisk the olive oil with the lemon juice. Season well and then add the fresh herbs.

Sear the Mahi Mahi for about 3 minutes on each side

Place on top of lightly tossed salad and top with Watercress bundle.